A big “Thank you” to Wesley Pulkka of the Albuquerque Journal and to Brendan Picker of Local IQ for not only reviewing Mary Zaremba’s show, but also for writing beautifully and with much insight.

Picker interviewed the artist which added a nice more dimension to his review. He starts out by saying:
“This new photo series, entitled Life After, by local artist Mary Zaremba, belies her energetic, spunky and ultimately engaging personality. Not that this series of images isn’t engaging; they are, but the images are so “still,” it’s as if her delicately wrinkled subjects – decaying flowers and other organic materials – are frozen in crystal.”
Picker quotes the artist as she comments on her use of the scanner as her camera: “Its’s another window to see. My house has dried flowers and seed pods in every room. I let them go and watch them transition til the bitter end. I like watch them evolve into something completely different but equally beautiful.”
He comments: “With this technique, certain qualities become heightened. She is able to magnificently display each twisted spine of a curled vine. The fuzz on a petal of a Proteus plant becomes larger–than-life. The again botanicals are soft hued, shriveling and ultra fragile and Zaremba’s images have a depths of field that is simply stunning, with a highly detailed subject I the foreground that swiftly falls away to black."
“My favorite piece is Blue Thistles. The sharp prickles almost explode off the paper and the blue is otherworldly. Her Daffodil portrait looks like some exotic deep-see creature, descending into the darkness. Zaremba uses this tool to play with scale and depths of field, making theses natural objects appear almost supernatural.”

He ends with “…..using the scanner – is a way to interpret the world with a new set of “eyes.” Her results are stunning.”

It seems that Picker really liked the show!!!!


Pulkka was positively exuberant about Zaremba’s work (and she deserves every bit of this praise)
“Zaremba is an excellent photographer who instills a sense of awe in viewers. Her well-crafted and painstaking imagery of dead flowers and seed pods is beautifully elegant and timeless. “Golden Rose 3” and “Daffodil I” are reminiscent of the Dead Sea Scrolls and the Shroud of Turin. The faded petals drained of life but still revealing the veins that carried nutrients to the living blossom, have the brittle beauty of faded parchment or carelessly folded linen. Zaremba offers her images as a life after life. Through photography she resurrects what was once vibrant and transforms its purpose from fertility to reverence. Through her scanner Zaremba creates monuments to the lost struggle for immortality that every living thing experiences. The show is divided between seeds, stems and dead blossoms lending it a hope/despair dichotomy. Though the life force continues to defeat entropy, it does so at the expense of its constituents. Through the technique of isolating her images on opaque dark backgrounds Zaremba emphasizes the natural sculptural structure of botanical forms. Aside from his controversial pictures Robert Mapplethorpe was the consummate floral photographer. Zaremba is playing in Mapplethorpe’s league. She is the kind of artist that makes reviewing art worthwhile.” 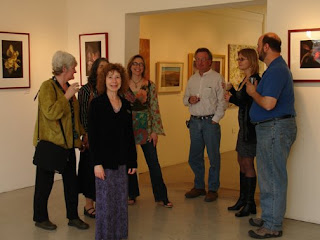 Mary Zaremba at her show.

Did he say she is in “Mapplethorpe’s league?” Wesley, you are a dear. And did I mention that Mary’s show was a huge success? Not only was the Matrix packed for the duration of the reception, but pieces were FLYING out of the gallery. Mary presents her photography in small editions, and her work continues to be featured at the gallery – just in case you missed her show .


When walking through the gallery, Pulkka’s well trained eye caught the very unusual work of Archer Dougherty, who just had her solo show in March. This emerging artist deserves to be recognized and Wesley was generous enough to throw some praise her way as well.

“Dougherty is a 26-year-old sculptor whose work is well crafted and detailed. In “Kylemore Abbey,” Dougherty presents five elongated forms that act like stained-glass windows as seen from the outside looking in. Their faces open through a series of vertically hinged doors. These well-executed mixed media works are rooted in architecture and include figuration, drawing, painting and carpentry. She continues to dazzle the eye in “Blossom” and “Construct.” If Dougherty avoids graduate school and eschews getting a real job she could evolve into the next Erika Wanenmacher.” 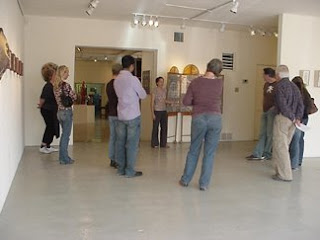 Archer Dougherty giving a talk at her show!
Wanemacher??!!! If you do not know about this artist you have to google her. She is fabulous.

Most pieces in Archer’s show sold, but since then she has brought in some amazing artist books encased in very unusual hand-made boxes – she never seizes to amaze us. 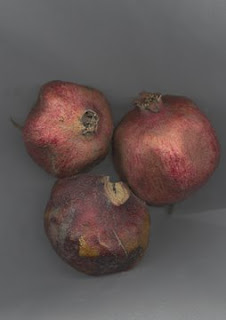 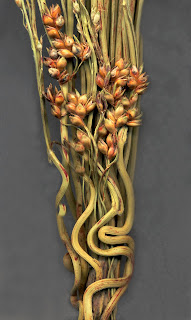 Zaremba uses flowers and organic materials as metaphors related to the themes of growth, change and aging. Flowers or botanicals are her primary subjects. Her photographs capture their vulnerability and transient beauty as they appear in varying states of life and decay.Zaremba uses the scanner as her camera. Through patience and a great deal of trial and error, she looks for a particular feeling and aesthetic for each image. Zaremba uses the photographic medium to capture the play of light across the delicate surfaces of her floral subjects. The resulting image represents the constantly changing shapes, colors and textures inherent in all organic matter.
Exhibition dates: April 4- 26
Posted by New Grounds Print Workshop at 12:46 PM No comments: