Elizabeth Frizsche is going to have her porcelain displayed at artspace116 from October 3rd thru November 14. The gallery is located at 116 Central Ave. SW Suite 201, Albuquerque, NM 87102. The gallery hours are Monday - Friday from 9a-5p. The website is www.artspace116.org for a preview of her work.
Posted by New Grounds Print Workshop at 1:20 PM No comments: 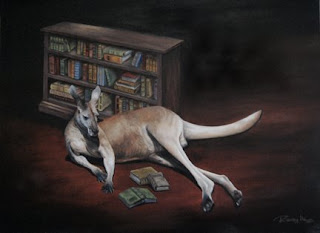 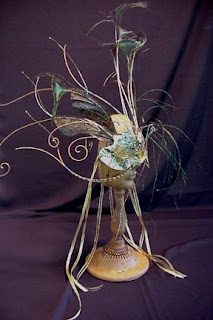 Wood’s figurative paintings are created with layered glazes reminiscent of Vermeer and Rembrandt. His work is influenced by his interest in mythology, religion and symbolism, resulting in powerful images that are at once frightening and beautiful. Judith Rauchfuss creates unique masks in the old Venician style of the Comedia del Arte.

Matrix Fine Art invited New Mexico photographers working in all mediums, styles and schools of thought to participate in Photo New Mexico – A Juried Photography Exhibition. Douglas Fairfield, a curator at the Albuquerque Museum, generously agreed to jury the show. As a gallery owner, I could not help but worry that we would not receive a single entry. Instead, we were swamped - we received 158 entries by 54 artists. Doug Fairfield assured me that he seriously enjoyed reviewing the selections and that he was very impressed with the quality of work presented to him. He chose 26 images by 25 artists. The show looked great!!! It covered a lot of ground from traditional to contemporary. It was nice to see familiar names such as David Antresian and David Ondrik, and to get to know some wonderful emerging artists such as Aaron Marie Beien and PD. Rearick. Skip to the end of the blog for a complete list of artists accepted into this show.

And what a crowd!!! The opening reception took place on July 5, the Saturday after Independence Day. Matrix usually opens shows on the First Friday of every month, but I had to move it due to the Holiday. Thanks to a great review in Local IQ, http://www.localiq.com/, and some intense blogging on Duke City Fix we could barely contain the steady throng of visitors. For a while, it was almost impossible to get into the gallery, and people spilled into the courtyard area.


As always, I was lucky to have great help. Here gallery assistant Paul Helphenstine and volunteer Carol Walker take a quick break from answering questions.


This was one of the best receptions we had all year. Either people looked for something to do on this Holiday weekend, or Albuquerqueans REALLY like photography. I like to think it was the latter – the crowd stayed until the bitter end and all of them voted for the People’s Choice award.


Votes poured in all evening long. Thank goodness, Paul continued to log in votes throughout the event or it would have taken us forever to count them all. It was also interesting to see how the favorites changed over the evening. 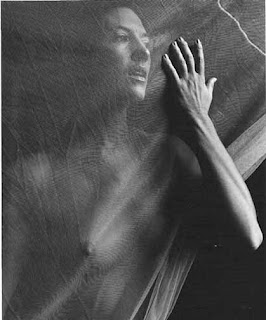 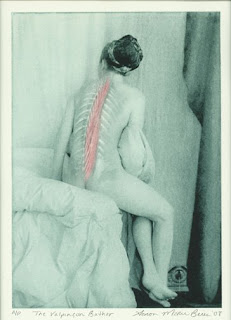 Lee Manning’s “Screen Test” was the leading piece off and on for most of the evening. The runner-up was Aaron Marie Beien’s “Valpincon Bather.”


When it was finally time to announce the winner of the People’s Choice Award, the crowd was in a serious party mood! Thank goodness I have a loud voice. The winner was.... 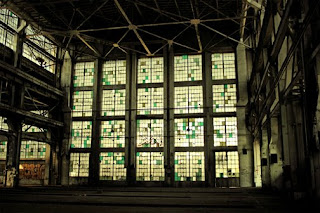 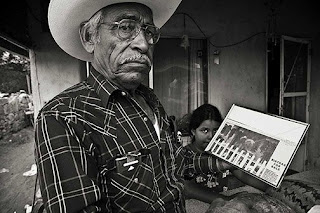 Two weeks later, Doug Fairfield gave an informal, but incredibly insightful and passionate gallery talk about his selections. He especially spent a lot of time on Tornick’s piece, pointing to the successful composition, the repetition of the checker pattern and the story behind the piece.


As Fairfield moved around the packed gallery he not only explained some of his selections, but also voiced some very interesting opinions. For once, he commentated on the importance of titles in photography; he sometimes prefers “Untitled” over an overly descriptive one. He elaborated that it is important for the image to speak for itself, and how an overly clever title can restrain the meaning for the viewer. As a gallery owner, I cannot help but have an opinion about titles. It is an important issue. I would like to hear what the readers of this blog think about this subject. How important are titles for you? Is it different for photography than other art media? Let me know what you think about titles!!!!!


I am sorry to announce that Doug Fairflield has left the Albuquerque Museum – he now writes for Pasatiempo. This is a big loss for Albuquerque! Read his juror’s statement below.

In the meanwhile, I am planning the 2009 Photo NM show to be held next July. The call for entry will come out early January. Check out our website and mailings for more info as the time comes closer. I definitely have to agree with Dough Fairfield: “Photography is alive and well in Albuquerque.”

Juror’s statement:
It is extremely difficult to avoid cliches in a juror's statement. We've all
read them and rolled our eyes in disgust or frustration. But in all
sincerity the process was tough; not so much the first go-around
wherein after reviewing 160 images 41 were singled out. But to
accommodate space allotments (and a directive from the top floor)
the final review was brutal. Consequently, a very good group of
images were reluctantly let go.

Given that my appreciation is alive and well for a myriad of
photographic genres and variants thereof, this exhibition is indeed
eclectic. But that's to be expected with an open call for entries. There
was no attempt to present a thematic show nor was there a single
vision, at least not consciously, to select work that conceptually fit my
own personal aesthetic. However, I do not warm up to any art that is
clever or saccharine in content. In addition, I have little patience for
photographic imagery where process is the overriding construct. In
short, show me an image that's worth looking at, be it conceptually,
politically, or socially motivated.-.or simply beautiful.

My criterion for the selection process was not atypical. I look for a
variety of things, including originality, technical expertise, critical
thinking and a critical eye. These are integral to an image that does
not readily slip from memory but, indeed, beckons you back for
multiple viewings. I believe the photographic images in Photo NM do
just that for various reasons.

I extend my thanks and appreciation to Regina Held, Director of
Matrix Gallery, for the opportunity to serve as juror for Photo NM. I
also thank her very competent colleagues for the organization and
installation of this show. To all of the photographer/artists who
submitted work, I urge you to keep working despite impossible odds
of "great" success as a creative individual. And finally, I salute Regina
for supporting contemporary photography in New Mexico.