Alex Eulert’s paintings are abstract propositions of worlds where divergent forces coalesce into harmonious aesthetic interaction. He draws his inspiration from a life long fascination with man as an integral part of nature, his manipulation of it and nature’s process of reclaiming human creations with the passage of Time.

Eulert’s works reflect his interest in ancient civilizations and, at the same time, express the juxtaposition between the modern and progressive and the classical and timeless. Process oriented and expressionistically inclined, Eulert skillfully explores the confluence between geology and archeology, denoting a benevolent interplay between the natural and the man-made. Delicate and dynamic string lines of paint buzz and trickle around often-bold bands of color, evoking rhythmical compositions, emotional states and natural phenomena. The cubical forms are suggestive of monoliths, pueblos, golden-green fields, unearthed inlaid armor from a Homeric poem—or, at times, technology and urban constructs.

A native of the Southern California backcountry, Eulert developed a profound connection with the desert and the life-giving force of the stream that ran through his childhood land.  The topography of the place, with its boulder outcroppings, multi-layered cliffs and rugged hilltops strongly influenced his aesthetics. The five years in England as an art student cemented Eulert’s love of age-old structures and highlighted aspects of human contribution to and relationship with natural environments.


Back in San Diego County, the wildfires of 2007 had a significant impact in Eulert’s life and creative process: they swept away his home and studio, and, while rebuilding his own residence, his creative focus shifted toward architecture and landscape design.  His interest in man’s interaction with nature intensified as he experienced first hand the abrupt dissolution of years of creative efforts, and took an active role in reconstructing his space while adapting to nature’s demands and challenges.

We also hosted a mini exhibition for Laura Wacha, in honor of her recent award from the AABA. Laura is one of 9 lucky artists to receive the permanent title of Local Treasure from the Albuquerque Arts Business Alliance, which is an incredible honor.

From the AABA website: For several years in a row, Laura has been named “Best Artist” by the readers of Albuquerque, The Magazine. This does not come as a surprise since her work is humorous, entertaining, obsessive, accessible, well-made and intelligent. She is a full time teacher, raising two children and dedicating all her spare time to creating art and sculpture, writing books and being creative on every level. Her imagination is boundless and her work continues to grow both in technique and content. Laura was very active in the community she began her personal journey through breast cancer three years ago. 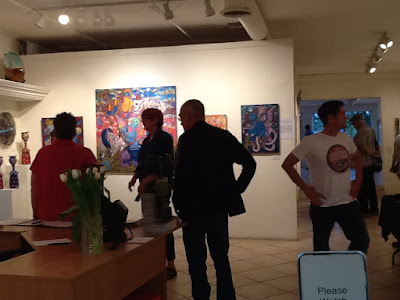 Laura Wacha says of her work:

I am motivated by the potential theater of the painted picture. My work is narrative in nature, and my focus is to create a visual itch that lingers in the mind like an unanswered question. On each canvas I paint images both familiar and fantastic, giving equal importance to topics domestically mundane and globally tragic or vice versa. Tucked between cartoon-like creatures and patterned backdrops are brightly colored dollops of intrigue and ambiguity that serve as an invitation for the viewer to fill in any perceived narrative blanks.
Naturally, opportunity exists in the act of painting to create a pleasurable anxiety not only through the characters present in each narrative, but also in the manner they are portrayed. Both composition and color urge that I take full advantage of their potential through balance, discord and repetition. In my work, for every action there is a reaction or rebuke, for every blue there is an orange or green, for every shape there is it’s echo and void. I work on these aesthetic aspects of my paintings rather intuitively, keeping at it until the canvas feels like the controlled explosion of design and color that best expresses the tenor I am aiming for.

Did you miss the opening reception? Don't worry. Both exhibits run through September 25, 2015.

More shots from the opening: 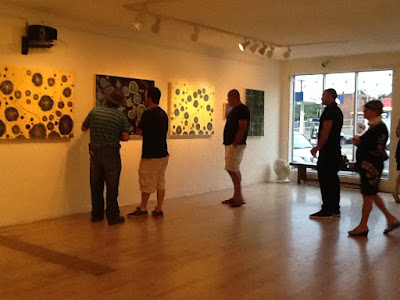 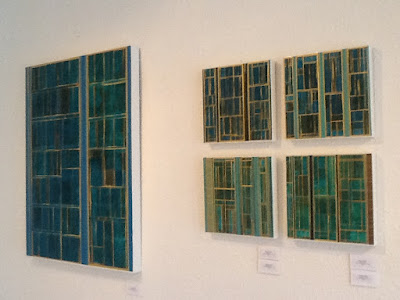 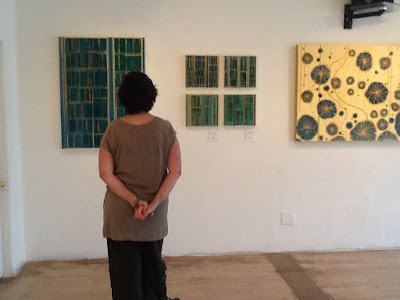 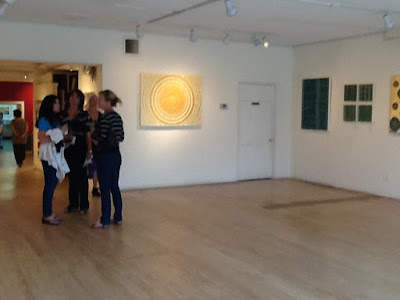 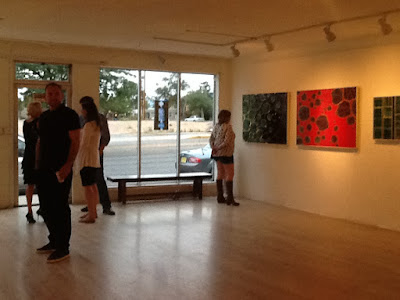 Posted by New Grounds Print Workshop at 5:05 PM No comments: